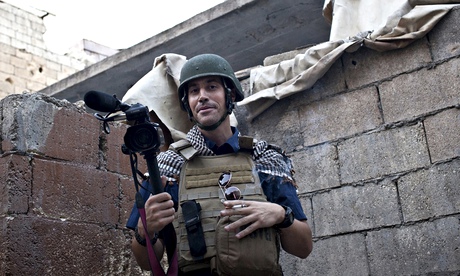 Governments are falling short in their efforts to combat impunity in the killing of journalists, with 90% of murderers walking free, according to a report issued by the Committee to Protect Journalists (CPJ).

It says the lack of justice in the hundreds of murders of journalists around the world continues to bedevil press freedom.

The report, The road to justice: breaking the cycle of impunity in the killing of journalists, argues that governments have failed to take meaningful action to reduce the high rates of targeted violence and impunity against journalists.

In the past 10 years, 370 journalists have been murdered in direct retaliation for their work. The vast majority were local journalists reporting on corruption, crime, human rights, politics or war. But there are very, very few arrests or convictions of perpetrators.

Elisabeth Witchel, the report’s lead author and CPJ’s consultant on its global campaign against impunity, says: “The unchecked, unsolved murders of journalists who seek to inform their societies and the world is one of the greatest threats to press freedom today.

“It is crucial that national governments and the United Nations system provide the resources and political support to break the cycle of impunity in the killing of journalists.” 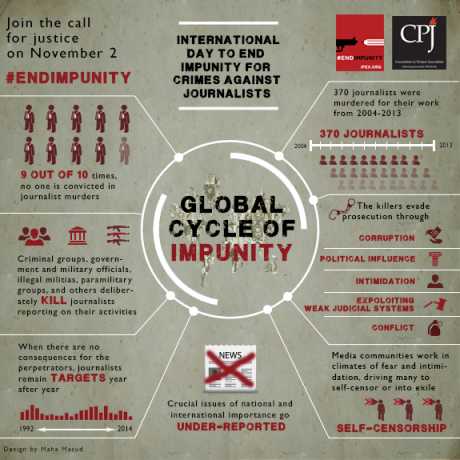 A graphic illustration of the terrifying problems faced by journalistsThe report’s release comes ahead of the first UN-recognised “International day to end impunity for crimes against journalists” on 2 November.It combines data analysis with the views of international experts, journalists, family members of victims, and press freedom advocates. It finds that while conflict, corruption and weak institutions all feed impunity, lack of political will is the most prevalent impediment to justice.

The report looks closely at places in which CPJ has recorded the highest rates of anti-press violence and impunity, such as Iraq, Somalia, thePhilippines, Mexico and Russia, as well as countries where journalists have been targeted in increasingly disturbing numbers, like Syria.

It also highlights countries that are starting to show improvements – such as Colombia and Brazil – and the challenges they continue to face.

Based on its findings, CPJ has made a series of recommendations, including calling on national governments and political leaders to condemn publicly and unequivocally all acts of violence against journalists.

UN and regional intergovernmental bodies are urged to take concrete steps to hold member states accountable to their commitments to combat impunity.

And journalists are called on to monitor and report on whether this pledges are implemented.

Drawing the line: Cartoonists under threat

In order to succeed, your desire for success should be greater than your fear of failure. - Bill Cosby
By SDQ          Tweet!