Anatoly Klyan, 68, a cameraman with Channel One, dies after attack near Avdiivka, blamed by Kremlin on Ukrainian troops
Monday 30 June 2014 12.41 BS 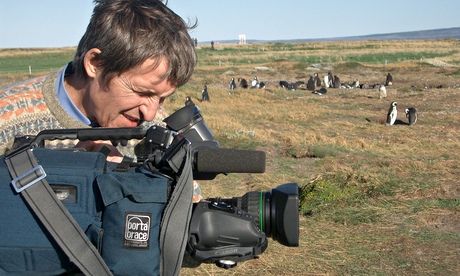 Channel One cameraman Anatoly Klyan, pictured in 2004, died after being shot in the stomach. Photograph: Channel One/EPA

A veteran cameraman working for Russia‘s Channel One was killed in eastern Ukraine when a bus carrying journalists and soldiers’ mothers was hit by gunfire, the station said on Monday.

Anatoly Klyan, 68, who had worked for the state channel for 40 years, was the fifth journalist to be killed since the fighting began in April, between Ukrainian government troops and armed pro-Russia separatists.

Channel One said its crew was travelling late on Sunday to a Ukrainian military base with mothers of conscripts hoping to bring their sons home, when their bus came under attack near Avdiivka, a village just north of Donetsk.

Russia’s foreign ministry blamed the attack on Ukrainian soldiers and demanded an objective investigation into the attack and for those responsible to be punished.

Video footage of the attack broadcast on Channel One showed Klyan continuing to film inside the bus even after he was shot in the stomach, stopping only when he grew weak and telling his colleagues “I can’t hold the camera any longer”.

Other journalists helped him into a passing car to be taken to a nearby medical centre. The station said doctors were unable to save him.

The bus driver also was hit in the head. He was filmed holding his left hand to his bloody, shaven head while continuing to drive with his right hand until it was safe to stop.

Channel One said the trip was organised by rebel fighters and that the bus, whose driver was wearing camouflage, came under fire as it approached the military base.

Ukrainian conscripts serving in eastern Ukraine tend to be from the region, where the majority of the population is Russian-speaking. Many conscripts may have little loyalty to the Kiev government or openly support the separatists.

Whatever the case, the mothers headed to the base on Sunday night wanted to protect their teenage sons from a military conflict that has already killed more than 400 people.

The foreign ministry said the attack showed that Ukraine’s armed forces were not interested in a cessation of the military conflict and was further evidence that they were violating the ceasefire.

Four other journalists have been killed in eastern Ukraine. A correspondent and cameraman working for Rossiya, the other Russian state network, were killed this month after being hit by mortar fire near the city of Luhansk. In May, an Italian photographer and his Russian colleague were caught in a mortar attack near Slovyansk.

Both sides have been accused of violating the 10-day ceasefire, which was set to expire at 10pm local time on Monday.

Monday also was the deadline that the European Union set for Russia and the separatists to take specific steps to ease the violence. Otherwise, EU leaders warned that they were ready to impose further sanctions

Man, alone, has the power to transform his thoughts into physical reality; man, alone, can dream and make his dreams come true. - Napoleon Hill
By SDQ          Tweet!